It blows my mined to think it was 100 years ago to this day that the misfits of the art world brought the same to its knees with the exhibition of the Society of Independent Artists. And yes, I know I mis-spelled “mind,” which was an accident — it is 4:30 a.m. in the morning as I write, the darkness outside my window calling me to get up, rise and awaken, even though my eyes aren’t quite focused, my fingers not yet wholly nimble — but it was a propitious accident, so I left it intact.

Mined. Brings to mind coal miners, who descend deep down into the dark to bring back precious jewels of soot, only to be burned off and create a white-hot heat.

Mined, as in land mines, too. I think Duchamp would have liked Princess Diana because she used her notoriety to bring attention to something that was important to her. In her case, it was the safety of children, women and people who lived amongst buried land mines. For Duchamp, it was an openness to play, a willingness to thumb one’s nose at the grand ideas, to mine the deeper recesses of the mind and follow the path blindly to wherever it took you.

There is another variant, of course, one which we all grow up knowing and spend the rest of our lives disabusing of its particular power: mine. Think on the word: mine mine mine mine mine. There is a “gimme, gimme more” sensibility about it, isn’t there? One which we are each born knowing–that of blind need–and eventually transform into the gifts we give of ourselves to others. The older we become the less mine-focused we are, and more mindful of the world outside of the container we identify as ourselves.

There is a definitive sense of power to the word variants presented here: mined, mines, mine. Last Tuesday, April 4th was International Day for Mind Awareness, as proclaimed by the United Nations. Today represents 100 Years to the Day of the world’s first peek into the minds behind the Society of Independent Artists exhibition, with the private viewing held on the 9th of April, 1917. It is also 100 Years – 3 Days from the date when America declared war on Germany and entered into what we now know as World War I — and it’s 100 Years +1 Day from that entry into World War I to the date of America’s missile strike on Syria, as ordered by President Trump on April 7, 2017.

Most important of all, it’s 100 Years +1 Day to the day when the Independent’s exhibition opened to the general public and Duchamp’s Fountain, the most famous artwork never exhibited, made its public debut. It’s also the day Beatrice’s own artwork, Un Peu d’Eau dans Du Savon (A Little Bit of Water in Some Soap) made its debut, and the day the first Blind Man Magazine was published.

Days and years, years and days; they come and they go, they are arbitrary. Why all this focus on Years and Days? I am getting somewhere, I promise. Stick with me here.

I woke up this morning asking myself one major question: had I missed the day? Did the anniversary come and go without me thinking of it? It was possible. I’m recovering from some kind of flu, the kind which invades your body like a land mine and blows it up, only your external parts are still there. It’s just your insides feel like they are trying to come out and all you can do is put your head down and rest.

Then there is the death of my dog, Fredgie, who died two weeks ago today. I still cry as I type that word, “died.” It’s so permanent, and yet, it’s not, not really, not when I think about it. I miss her so much and I woke up thinking about her this morning, how she came into my life at the perfect time and with the perfect size. A full-size dachshund is a great substitute for a human-sized baby, let me tell you. How she would wrap those little paws of hers around my arm and pull me close when I was holding her on my lap. She was adorable in the way all babies are adorable, and just as needy with her physical problems over the years: heart worms first, then a slipped disc, then recovery from a physical attack by another dog, and the final slow deliberation of congestive heart failure.

I could have said debilitation but that isn’t quite the right word. The insouciant turn of the head and dash toward the door when we were going the other way. The way she would hear me say “wait” and decide if she were going to listen, then do what she was going to do anyway. The promptness of the period from when she first really turned the corner and vomited all the contents of her digestive tract out, and the time she died a mere 24 hours later. One full day.

Plus one hour, if I’m being super truthful. It took 25 hours for her body to decide it was time to go. Deliberation, but not debilitation, not really. Fredgie was as focused on food, rides and walks as she ever was, right up until the end — and in that we were all so fortunate, for she was so completely her — and so completely mine from the time I first saw her behind the chain link fences of the local animal pound to the time she died in my arms. 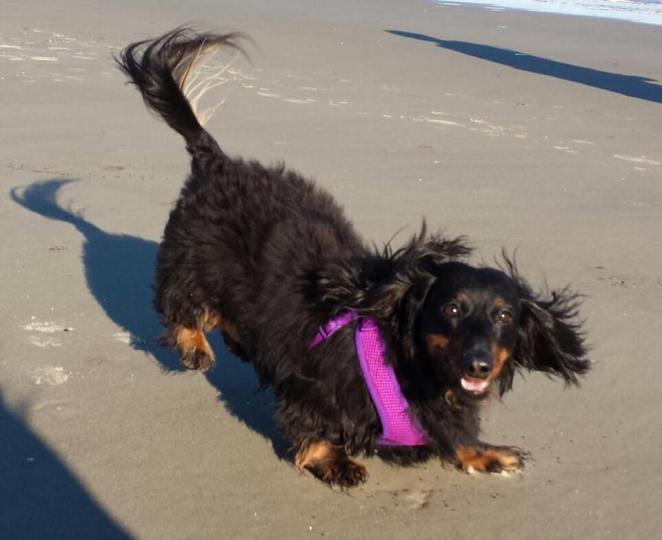 I woke thinking about how Fredgie had been like a perpetual baby in terms of both her size and her need for the seven years we had together. It was like being in that first-rush state of mommy-hood when all your instincts instruct you to protect the little human at any cost, and you do, no matter what the obstacle: personal, financial, or other. There is no price you are unwilling to pay for this sort of relationship. It’s as integral to you as breathing.

Here’s my point: those little humans are like your artistic accidents. Protect them at any cost, even though they may seem to want to fool you into loving them on account of their needy infancy, their sheer delightfulness, their unconditional love for you.

Kill your darlings, they tell you in creative schools of thought. In other words: don’t be wed to your ideas, be willing to edit them down, to find a hole and make them fit. Be mindful.

But don’t be so mindful that you let your accidents be burned up by the white-hot heat of thinking things through. Don’t overthink them. That’s Duchamp’s grand lesson to us: take what you know and spit on it. Be willing to rub people the wrong way, just like he rubbed the noses of some committee members into their high-flying ideals, ones which stated any artist could enter whatever work of art they wished and have it displayed in exchange for the entry fee.

Be willing to detonate some land mines to expose the soft underbelly of truth.

Stay in that first-born sense of the mind, the one which wonders and wanders and has a sense of complete entitlement: mine. The one which understands there is a power structure, yes; there is someone who feeds me and rubs me and changes me daily, who takes care of all of my needs, who is powerful and all-knowing, to whom I owe a great deal. But don’t forget to keep growing, too. To reach beyond the boundaries of what you see and hear to what you know to be true.

Duchamp could have stopped producing or even kept on producing the same thing, piece after piece, day after day, year after year, if he had wanted to. He could have rested on the laurels of his infinity after his boxy Nude Descending a Staircase No. 2 hooked the 1913 Armory Show and he could never have had another original artistic thought — and he still would have made a living as an artist. He could have, but he didn’t. Instead, The Fountain. Instead, we remark on it 100 years later and thank him for thinking outside the box, outside so many boxes.

Outside the infinite box.

I’m reminded here of dancer and choreographer’s Twyla Tharp’s boxes. She’s famous for starting a new box for every new project, then throwing everything that comes to mind into it. Boxes are a literal place for her to gather her thoughts and ideas. I am also reminded of someone who once said you can be true to the facts without being correct — a mantra for the writer writing about history and reality. “Don’t let the facts hold you back,” is the idea. Let them be a springboard for truth.

As an artist, it’s your job to ask yourself: is it the soap in some water? Or is it the water in some soap?

What are the facts. What is reality, and where is the truth?

Days and dates will come and go. The years will fly by, and maybe I’ll have another Fredgie come along, some other spirit which barks for joy at the opening of the refrigerator door and marches down the streets like a little Napoleon. But until then, I’ll just keep mine-ing the field, opening up and closing the indefinite boxes of the mind.

Beatrice’s 1982 painting of her own Dali Dog, who died many years earlier. Or did he?